Bacillus thuringiensis (Bt) is a kind of beneficial microorganism that exists widely in nature. It produces proteins that are toxic to immature insects (larvae).

There are many types of Bt bioinsecticide. Each target targets a different group of insects. Target insects include beetles, mosquitoes, root aphids, nematodes, caterpillars, and grub. 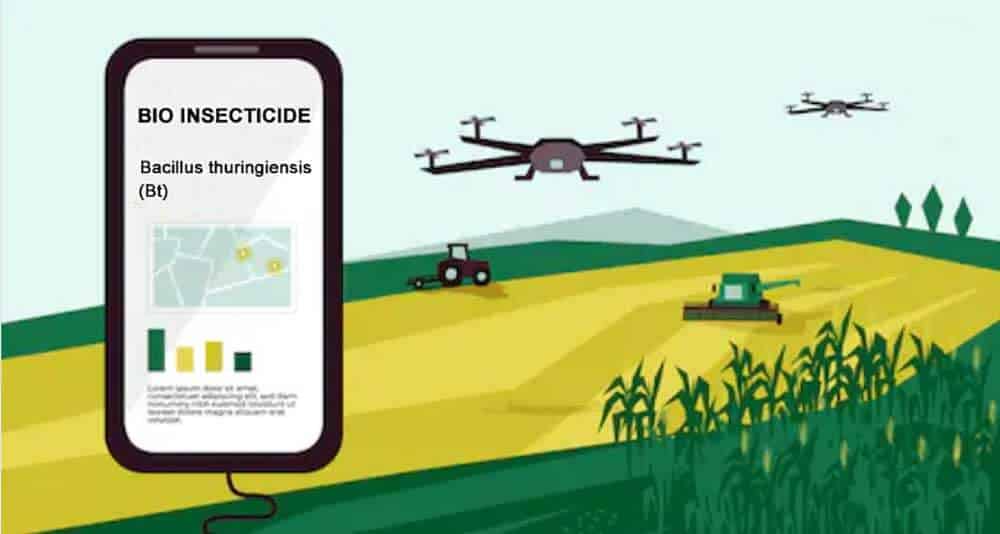 The colony of Bacillus thuringiensis on the NA medium is round or oval, light yellow, with irregular edges, opaque, and slightly raised, and waxy.

Bacillus thuringiensis cells are purple elliptical rod-shaped under the microscope, with a size of (1.2～1.8)μm×(3.0～5.0)μm, arranged in short or long chains. The spores are elliptical and grow near the middle.

How does Bacillus thuringiensis (Bt) work

When these insect larvae gnaw on the leaves with the bacteria, the parasporal crystals will be dissolved and released in the insect’s highly alkaline intestines, preventing the larvae from further eating plants, loss of appetite, endotoxins destroying the intestinal cell wall, and finally breaking the intestine, leading the toxins to enter the larvals’ blood system, causing systemic poisoning. Infected insects stop foraging within a few hours and die within a few hours to a few weeks (usually 2-3 days).

This mechanism can make Bt harmless to fish and mammals because their acidic intestinal conditions inhibit bacterial toxin dissolution.

Due to its non-chemical pollution and low toxicity, Bacillus thuringiensis has been widely recognized and used since the 1950s, and is often used as a biological pesticide, biocontrol agent in organic agriculture.

As a biopesticide, Bacillus thuringiensis (Bt) has many advantages compared with chemical pesticides.

How to apply Bacillus thuringiensis (Bt)

Bt will quickly inactivate under the ultraviolet light (sunlight), but it will survive longer at night, under cloudy or humid weather. The application of Bt insecticide does not continue to control insects through the reproduction of bacterial cells. The application of Bt is similar to chemical insecticides, using its protein toxins to kill insects. After preparing the Bt solution, it should be used immediately, especially when the pH value of the water for preparing the solution is greater than 7 (alkaline), the toxin is easy to dissolve, so use it in time to avoid inactivation.

In addition, after two or three years of storage, the effectiveness of Bt products may be reduced. Dry powder lasts longer than liquid formulations. Bt products should be stored in a cool and dry environment, away from direct sunlight.

In tea, corn, vegetables, and other fields, there will be pests such as spodoptera frugiperda, armyworm, beet armyworm, corn borer, etc. When the larvae of these pests are found, microbial agents such as bacillus thuringiensis should be applied as soon as possible and used repeatedly. It will reduce the density of pests and achieve the purpose of avoiding them.

In short, Bt is a microbial biological pesticide, which is very specific to lepidopteran insects. It causes the insects to stop foraging within a few hours and usually kills the insect larvae within a few days. However, due to environmental factors and rain washing, it cannot last for a long time on plants, so it needs frequent use. It is considered organic to agriculture and non-toxic to mammals.

Finally, the main control objects of Bacillus thuringiensis are attached:

It also has a certain control effect on root-knot nematodes, mosquito larvae, leek maggots, beetles, and other pests.