On September 15th 2019, Dora Agri tested 1-MCP on figs fruits, we collected the test data and analysed the results.

Test results: 1-MCP can significantly delay the decrease of fig firmness, inhibit the accumulation of respiration rate and ACC content, reduce the activity of ACO and ACS, and thus significantly reduce the production of endogenous ethylene in the fruit.

The peak of ethylene release appeared 5 days later than the control group. Compared with the control group, the 1-MCP treatment group with different concentrations can delay the maturation and senescence process of figs to varying degrees, and prolong the storage time, especially the 1.5 μL/L treatment that has the best effect. (More details of 1-MCP) 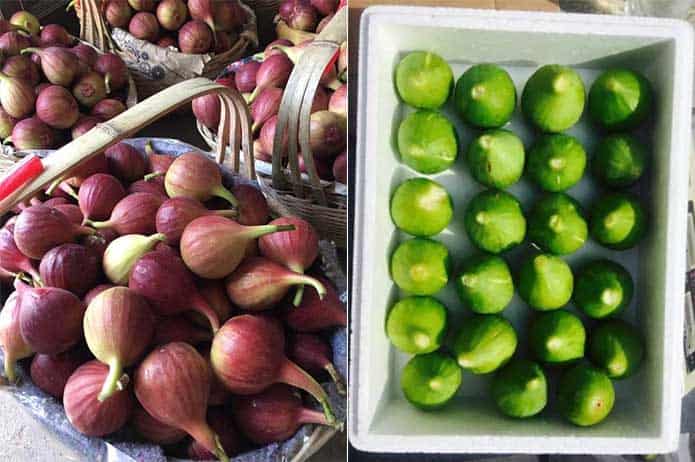 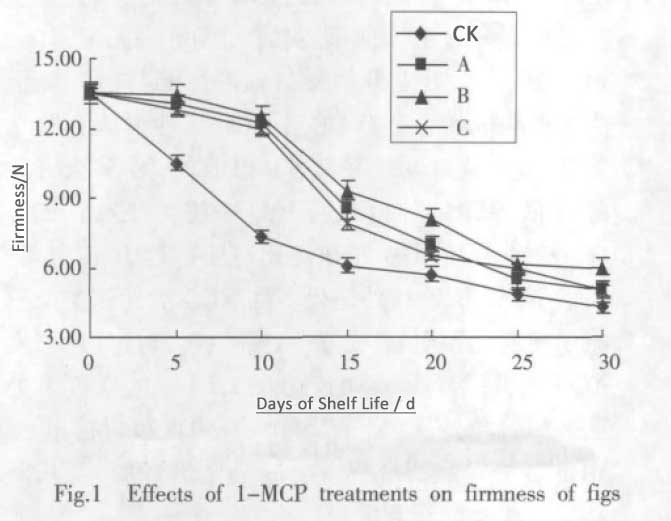 The change of fig firmness is one of the important indexes to measure the storage effect. During the entire storage period, the fruit hardness of each treatment group and control group showed a downward trend. 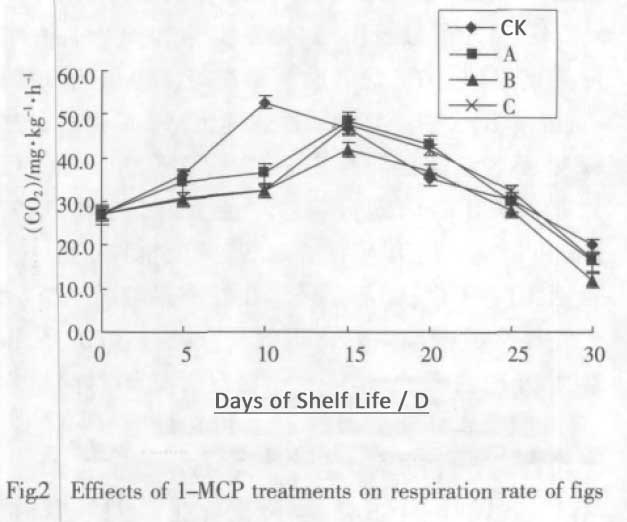 The respiration rate of figs indicates how fast the contents in the tissues are consumed, reflecting changes in respiration, and is one of the important physiological indicators for post-harvest physiological research and storage practices. Figs are a typical respiration type fruit with obvious respiratory peaks. 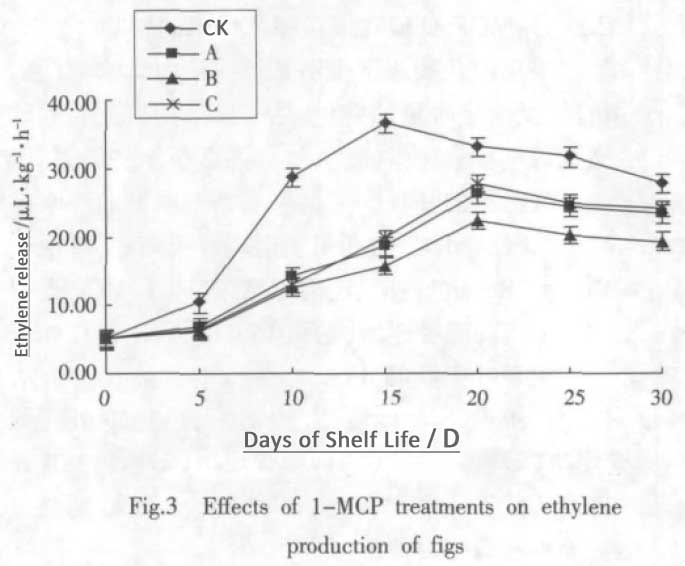 The ethylene release from fig fruits of the treatment groups (A, B, and C) did not change much in the first 5 days, and increased slowly from the 5th day. There was a jump peak on the 20th day, with peaks of 26.16, 22.33 and 27.83 μL/(kg· h) It appeared 5 days later than the control group, and then decreased.

4. Effect of 1-MCP on ACC Content of Fig Fruit 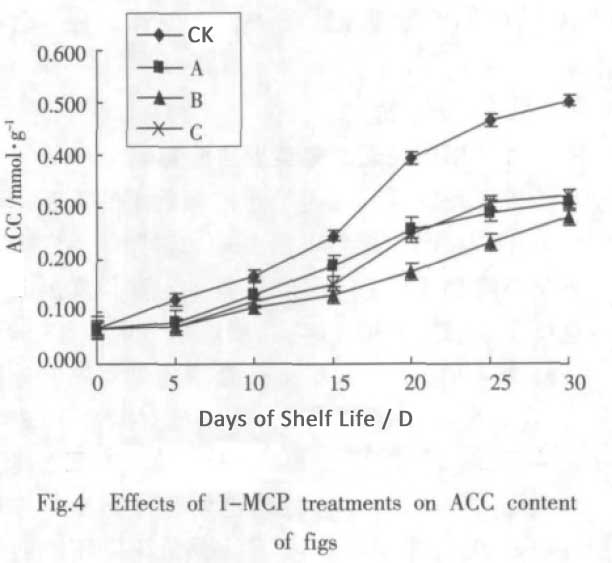 1-MCP reduces the precursors of ethylene biosynthesis by reducing the accumulation of ACC content, thereby delaying the senescence process of figs and achieving the effect of storage and preservation.

5. Effect of 1-MCP on ACS Activity of Fig Fruit 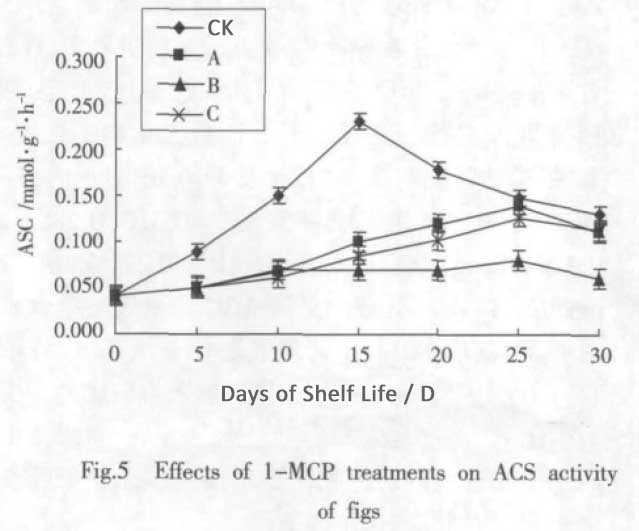 1-MCP inhibits the activity of ACS, reduces the accumulation of ACC content, and finally achieves the purpose of inhibiting fruit maturity and senescence.

6. Effect of 1-MCP on ACO Activity of Fig Fruit 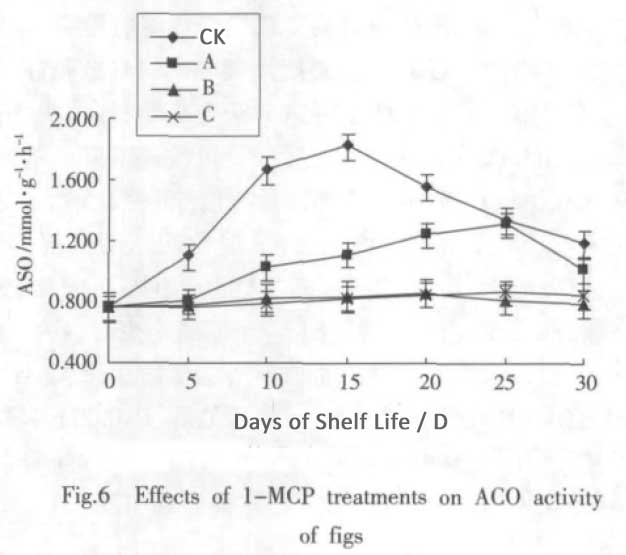 The ACO activity of figs in the A treatment group was very low in the first 5 days and increased slowly from the 5th day. The peak appeared on the 25th day, with a peak value of 1.311 nmol/(mg·h), which was 72.0% of the control group, and was 10 d appears and then drops. The ACO activity of the B and C treatment groups did not change significantly during the entire storage period.

Different concentrations of 1-MCP treatment groups can inhibit the respiration rate and ethylene release of figs during storage to varying degrees, delay the appearance of peaks; significantly delay the decline of fig fruit hardness, reduce ACC content, and inhibit ACS and ACO activities.

Therefore, it has a better preservation effect on fig fruits and maintains better storage quality. By comparison, the fresh-keeping effect of the 1.5 μL/L1-MCP treatment is better than other treatments, which is more conducive to the maintenance of its storage quality.